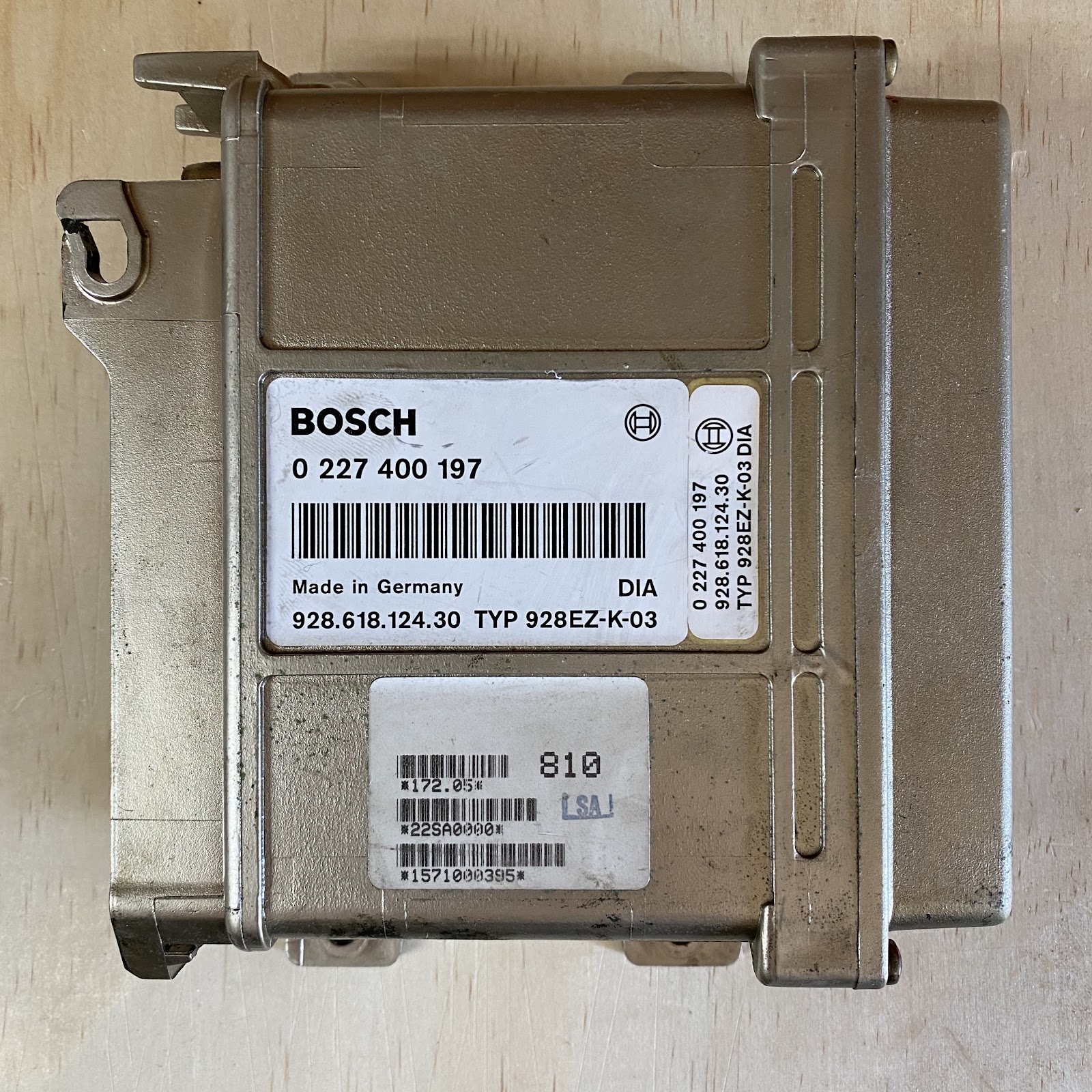 Note to readers: Please help us improve these instructions by posting your comments to the document. We will review and update as needed. Thank you and enjoy!

Locate the EZK computer and remove it from the vehicle. It is mounted next to the LH computer on the passenger A-pillar near the floor and CE panel. The EZK is mounted on top of the LH and can be removed by first disconnecting the connector, and then removing four 8mm nuts and washers (pro tip, have your magnet wand ready to fetch the washers).

(need to add a picture of EZK in situ)

Place the EZK on a clean, well lit work surface.Identify the 8 screw fasteners, four on each end cap. You need to remove all of these. 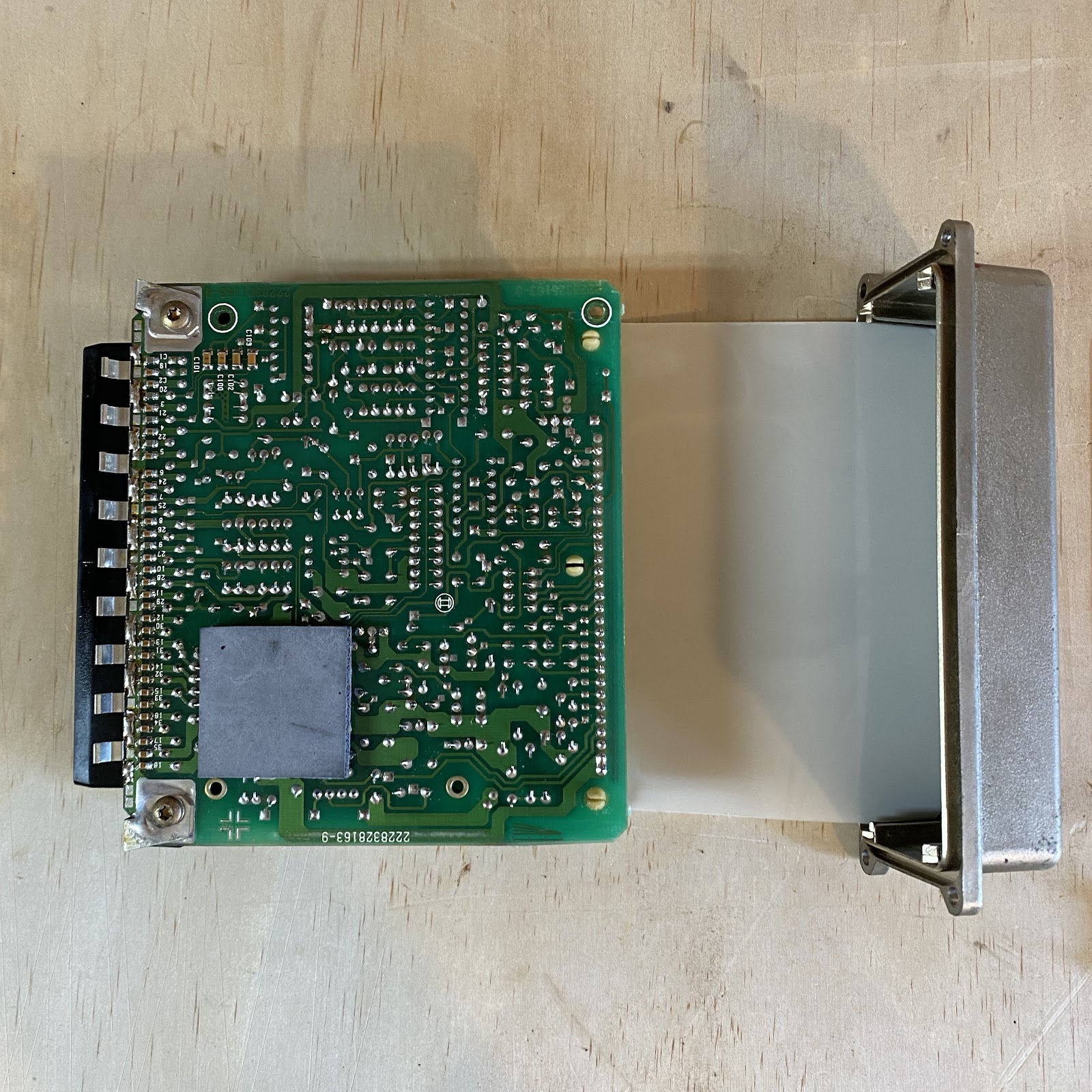 The EZK is two printed circuit boards (PCB) that are secured together. You will need to separate them to access the chip. Start by examining how the connector is soldered into the bottom PCB. You will need to remove the two screws on the top PCB.

Now you will need to separate the plastic quick release sockets opposite the connector. I used a small flat blade screwdriver to speed the slit and then pry apart with my fingers.

Slowly and carefully open the two PCBs like you would a book.

Identify the chip to be replaced. It is on the top PCB and sits in a removable socket under a protective cover that prevents light from damaging the chip. Carefully pry up the plastic cover and remove it to reveal the stock chip.

The cap can be removed using two micro flat-blade screwdrivers inserted in the two slots on top. Once inserted pinch them together to release the cover.

Here is a close up of the cover removed so you can see the gripper teeth that need to be released.

Pay special attention to the orientation of the chip. There is a small U shaped marking to indicate the lead pin, or which direction the chip should be oriented. In this case the U should be closed to the outer edge. Make sure you orient the replacement chip in the same manner.

Carefully pry the stock chip out of the socket, lifting a little on opposite ends to not damage the pins.

Place your stock chip in the storage case provided for safe keeping.

Install your replacement chip in the same orientation, paying careful attention to the location of the lead pin.  Be very careful to align all the pins into holes before pushing it down. Note, before you install the chip, take a photo so you can record the version number.

Reassembly is largely the reverse of the disassembly instructions.However there are a couple of helpful hints.

When re-assembling make sure you don’t cross thread the screws or over tighten them.

Go for a drive, adaptation will start after the car has reached operating temperature and will take about 25-miles of varied shifting and accelerating to build an optimized map. Avoid long highways because there are little optimizations.  For the fastest adaptation time the chip can be gamed by accelerating to over 5000 rpm and then letting the rpms drop below 2000 repeatedly. (Manuals put in clutch.)

The EZK-S has the ability to signal the driver when it is actively advancing or retarding ignition timing using an indicator light powered by an output signal (See EZK-S Diagnostic Definitions section for more information). Below are instructions for activating this signal.

You can activate the diagnostic indicator by building a light harness that plugs into the diagnostic port at the ECU and plugs into an empty socket in the pod. The CAT socket for the antrailer signal sockets are usually unused. I have tried both and I find the CAT socket to be more visible but not distracting.

Build the harness by removing the dummy socket on the diagnostic port just under the EZK box on the A-pillar. You will need:

Disassemble the socket and remove the spare pins. You will need to solder one pin to each lead. Make sure you give yourself a couple extra feet of wire to account for routing and removing the cluster.

Re-assemble the pins into the pin locations noted below.

At the other end of the leads attach the leads to a standard pod light. I prefer these LED’s in amber or red. You will need to get creative on how you attach the wires to the terminals in the LED. I extracted the led from the plastic socket, and soldered the wire lead to the metal tabs and pressed it all back together and used heat shrink to seal it all up.

This is a good time to test your harness, plug it into the socket and turn the ignition on, the light should stay illuminated.

If you are using the CAT location on the cluster, you need to insulate the traces from the LED contacts otherwise you will send voltage through the cluster and accidently power things that should not be powered.  I used two layers of masking tape.

Once installed into the cluster, its a good idea to test it again to make sure all your connections are correct.

Activation of the CEL on later cars is a little easier, there is no need to install extra wiring. The instrument cluster has two unused light bulb sockets, one for the CAT and one for the CEL light.

By installing B8.4D LEDs in the CEL opening it can be activated to indicate knocking for the chip. Both the EZK and LH have access to the CEL. If the light comes on permanently, this will mean a fault in either ECU. Activation of the CAT light can be done with the same style LED. It is optional and has no function in North America (Some ROW cars have CAT temp monitoring).

The LEDs used below came from superbrightleds.com. Reference B8.4D, warm 2900 k, color red. Tip: SMD LEDs can be very bright! If the intensity needs to be lowered, cover them with a small piece of white electric tape. Check the brightness before final pod installation, LEDs cannot be dimmed easily!

Once you have the diagnostic indicator functional, these are what the flash indications mean.

One thought on “EZK Self Tuning Chip Installation”